Lauren Witzke, the Delaware Republican senate candidate running against incumbent Senator Chris Coons of the Democratic Party, Tweeted on Saturday that “Sources close to and with deep knowledge of the investigation, have informed me that Chris Coons’ DAUGHTER in addition to seven other underage girls are also featured on [Hunter Biden’s] laptop.” 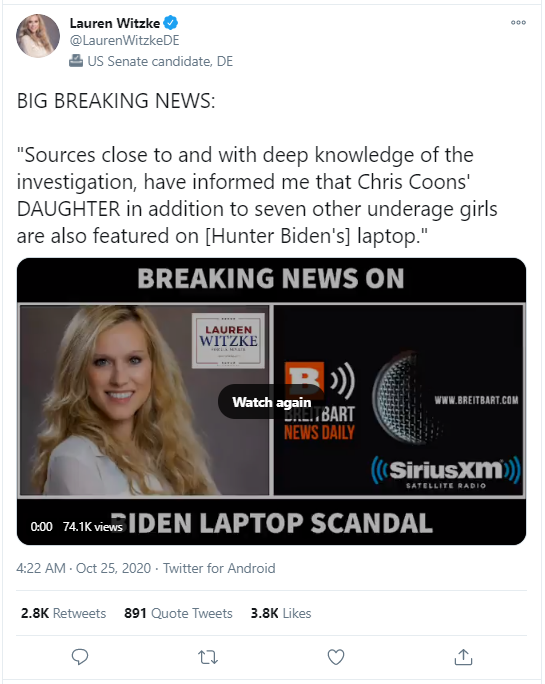 Maggie Coons, then a 13 year old girl in 2015, is known for the infamous video showing her embarrassed and uneasy face when VP Joe Biden handled her inappropriately including “sniffing” and touching. This scene was criticized widely by the public including mainstream media at the time but her father Senator Chris Coons defended that “she doesn’t think the vice president is creepy”.

On the interview with Breitbart News Saturday, Lauren Witzke accused his opponent of covering up Joe Biden’s misconducts including he and family’s collusion with the Chinese Communist Party (CCP) government. Witzke called the CCP “the biggest ally of VP Joe Biden” as well as the “right hand man”. With his daughter involved in Hunter Biden’s laptop scandal, Mr. Coons together with other people are working hard to cover it up as quickly as they can.

According to a Gateway Pundit’s report , Senator Coon said his daughter “did not think of it as anything”.

“Laptop from hell” is now with Delaware police, will they investigate?

The Hunter’s “laptop from hell” reportedly has a large number of documents, pictures and videos. The content covers his business collaborations in China and other countries, including a lucrative business loan agreement with a Chinese company.

Other personal materials in the laptop include drug usage and sex acts including disturbing material of child sexual abuse.

Former NY mayor and President Trump’s personal lawyer Rudy Giuliani said in a video that the laptop was handed over to the Delaware police for further investigation. In the same video, Rudy Giuliani revealed that a Biden family member who was at that time a 14 year old girl, had Facetime naked with Hunter, based on text messages between Joe Biden and Hunter Biden.

The FBI was reported to have seized the laptop in December 2019 but have been keeping it from the public.The FBI claimed that they were working on the money laundry investigations while ignoring the more obvious child sex offences.

It remains to be seen if the police will finally investigate the content in the laptop. The evidence of crime is solid, and if ‘equal justice’ is to apply the Bidens should be prosecuted instead of running for public office.

On Sunday October 25th, more bombshells were dropped on GNEWS.ORG and GTV.ORG. Pictures and videos of sex acts and drug usage, which confirmed the contents in the “laptop from hell” owned by the US.

In a sex video revealed, Hunter Biden was having sex with his late brother Beau Biden’s wife, Hallie Biden. Also exposed are a series of photos of Hunter Biden naked in a hotel where the sexual activities purportedly took place.